welcome back to hedgerow! the first issue of 2015 brings you 16 different poets & artists. as always, grateful to contributors & readers alike, please keep sending in your work as well as spreading the word, every effort really counts! 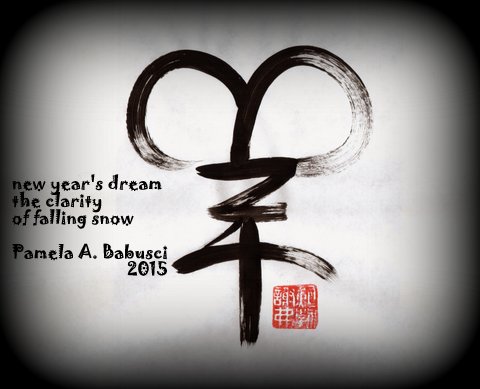 Pamela A. Babusci is an internationally award-winning haiku/tanka & haiga artist. She lives in Rochester, NY, USA.

what if
while shoveling tonight,
I stop
just for a moment
cease the stooping, stabbing, groaning and lifting

my ghost age 6
rides in on that wind
whispers, giggles
the gust of cold –
breathless
like the moment
at the end of a wicked sled run

flakes collecting
on my eyelids
like they did when
I finished making snow angels
just lying there, collecting them

like wishes
like potential
icy absolution
melting away
all flaws
all complaints
all guilts, real or imagined

we are clean in this frosty night
new in the world
once again.

Stacey Murphy is happiest when her thoughts are clear, short and haiku shaped, but living in Ithaca, NY helps too.

safe inside a box
the christmas bulbs
from our shattered family

reaching for the wind…
in another life
I was a willow

Chase Gagnon is a student from Detroit, who loves staying up all night drinking coffee and writing poetry. His poems have appeared in a number of journals and anthologies over the past two years.

in my arms
a wounded eagle or
a half-waking moment

Lizz Murphy has published twelve books. Her seven poetry titles includePortraits: 54 Poems and Six Hundred Dollars (PressPress), Walk the Wildly(Picaro Press), Stop Your Cryin (Island Press) and Two Lips Went Shopping(Spinifex Press print and e-book). Her next title Shebird is forthcoming (PressPress). Lizz has been a featured poet in festivals and programs from the Illawarra to Darwin and Launceston. She is available for workshops and mentoring etc. 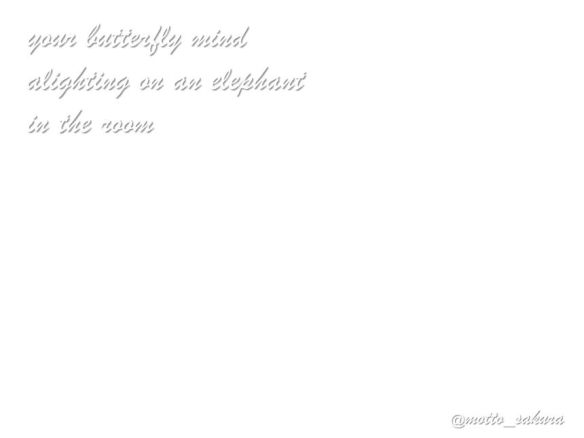 white butterflies at the window —
snowy morning —
my nearsightedness

bowing to the setting sun my shadow walks into the sea

Zee Zahava lives in Ithaca, N.Y. She writes most of her poems in a small notebook while taking her early morning walks. She is the editor of brass bell, an online haiku journal: http://brassbellhaiku.blogspot.com/

walking uphill …
one by one my steps
before my shadow

Archana Kapoor Nagpal is an internationally published author of four books and three anthologies. Presently, she resides in Bangalore, India. You can visit her Amazon Author Profile to know more about her books and literary contributions.

bad temper
even my shadow and I
are not talking

family tree
the seed that fell
further away

Mike Keville from London AKA Mikeymike.

Not until this moment,
the sky impossibly coral streaked
& filled in by downy cloud,
did I accept the end of another year.

Some of what goes up does not come back the same:
the leaf that fell now rises as smoke,
its rustle now crackles,
its color now roasts,
& its rust smells of cherry, oak, & smoky peat.

soon, I know, the cold rains will come,
the leaves’ revenge, the end of fire,
the long sleep of seed & soil,
until the green fuse lit:
pop of bloom, crack of ice, hum of bird return.

but now, this evening that holds the cold away at a flames length,
a sky beholden not to art,
there is no sense in holding on to the past,
just being here now, just seeing & smelling
the end of another season is enough to settle this month’s doubts.

William C. Patterson lives, teaches, and writes in northeast Kansas. The poems come from his life with his family, his life teaching literature and composition, and the daily commute between these two lives. 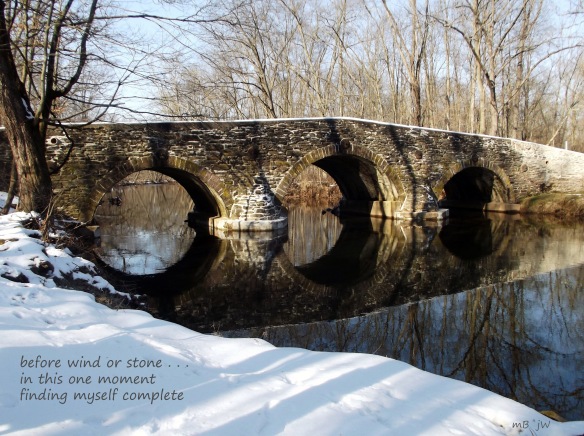 five days of mourning
broken by
a cardinal’s song

Nells Wasilewski lives in the United States where she retired from the mortgage industry in 2011, and began pursing her lifelong dream of writing; she has had her work published in several Journals, magazines and books.

foster children
start writing winter poems
will hearts be touched?
outside
wanting in

Janet Qually (USA) has been published in several journals and enjoys writing all forms of poetry. She frequently creates computer graphics to illustrate her work.

I tuck in my dolls
tell them
not to be scared
Mom and Dad
at it again.

As close as I can get
to my dead mother
her friend
who misses her
every day.

me deep into murky depths
of shallow

forces of the current bend

the willow straining
I panic it will break
will I 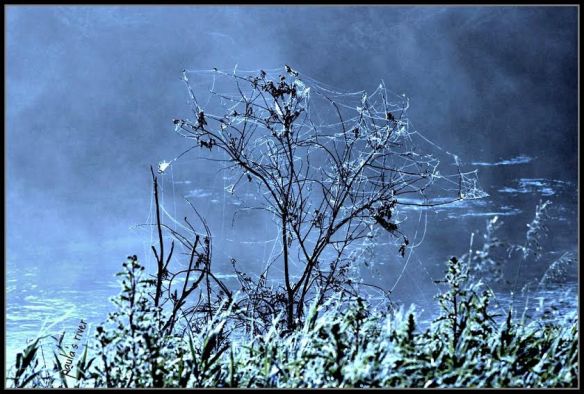 Tears are just a way
To wash the dust from your dreams
Dry them carefully. Look!
See how they sparkle in the Sun

driving home
under the inquisitive gaze
of a spotted fawn

despite the clouds
I still believe …
rose moon

cirrus at sunset —
a line of fire rainbows
ignite the ocean